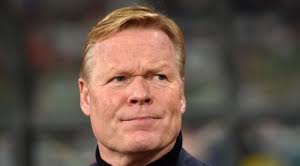 Why Barcelona Need To Win Copa Del Rey More Than Ever

it’s been a year, eleven months, and 19 days since Barcelona last lifted a title, La Liga that’s 721 days, and it means that, as noted by Diario Sport, this evening’s Copa Del Rey final against Athletico Bilbao is more than simply the Copa the Blaugrana, and Ronald Koeman, really need a piece of silverware to mark the season

Koeman knows thea a season without the trophy will make his life more difficult, and is said to be completely focused on bringing home the trophy  from seville

Present laporta gives Ronald Koeman hope and confidence but Ronald Koeman knows the intensity of expectation that fails upon the man in charge at Camp Nou and how quickly the narrative can change.

for that, there’s so much riding on this final, especially after he’s overseen big-moment fail in the Supercopa De Espana against Athletic, the Champions Leeaur against Paris-Sain-Germain, and La Liga Against Real Madrid.

Kevin De Bruyne Out From Final vs Totteham