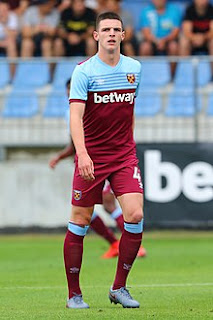 West Ham’s Declan Rice was perhaps getting a glimpse of what awaits him in the future as he watched Lionel Messi work his magic last night.

The Barcelona superstar netted a brace as Ronald Koeman lifted his first trophy as boss to beat Athletico Bilbao 4-0 in the Copa Del Rey final – and West Ham’s defensive rock was impressed by the ‘ridiculous’ Messi,

After an hour, Bilbao would have been pretty happy with proceedings because they had kept Barca at bay.

But that’s when the floodgates opened.

Within three minutes, the Catalan giants were 2-0 up, and the last thing Marcelino García Toral’s side needed was Messi bringing out his party tricks and going on a little dance