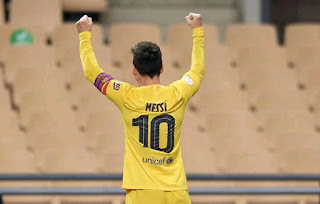 He’s one of the world’s greatest ever Players, who appeared destined to be a one-club man. But now Lionel Messi’s relationship with Barcelona looks to be irreparably fractured.  Sport looks at 20 defining moments in the career of the football superstar, who mesmerized, broke records and transcended his sport 2004

coming on as a substitute late in the

game. against Espanyol. At the time,

he becomes the youngest player to

represent the club in an official game

after joining the club’s famed La

Masia academy in 2000, moving from

Messi makes his debut for Argentina

in a friendly against Hungary at the

minute but receives a red card and is

sent off just two minutes later for a

There’s no doubt Barcelona has

something special on its hands and

the world is starting to take notice as

— the award for the best young player

After a rocky start to his international

Argentina with a signature run and

curled left-foot effort in a friendly

Coming on in the 74th minute against

becomes the youngest-ever player to

represent Argentina at the World Cup.

becoming the youngest scorer at the

Argentina out of the tournament in the

Messi is gaining a reputation for

being one of the hottest teenagers in

world football by now and his three

goals against Real Madrid in 2007

turned him into a household name.

It’s his first hat-trick for the club and

certainly not his last.

Few goals in the history of football

can compare to this one. Messi

slaloms his way past multiple Getafe

defenders to score perhaps the

greatest goal of his career. It

strangely mirrors a goal scored by

taking part in the tournament before

in to allow his participation. Lining up

in an all-star Argentina side, featuring

match on their way to securing the

gold medal at the Beijing Olympics.

Messi had already won the

Champions League in 2006 when

making his way into the first team but

finishes the campaign as the

tournament’s top scorer and nets in

the final against Manchester United in