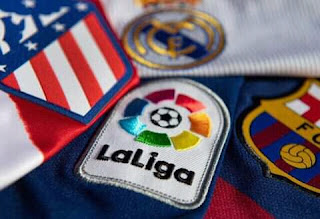 Barcelona and Real Madrid because they

consider the controversial Super League to be

The recently announced Super League has

rocked football to the core, with fans all over

the world voicing their displeasure at the idea

of a closed-off rival competition to the UEFA

been announced as chairman of the league in

said teams will be classed as founder

members and will not face the risk of

Alongside Perez’s Real Madrid, Barcelona and

Atletico Madrid make up the Spanish

the league and – despite the Premier League’s

condemnation of the plans following the

all three sides will not be expelled from their

domestic league despite wanting to participate

in the breakaway competition.

‘born dead’ and therefore see no reason to

force such sanctions upon their biggest

A whole host of punishments have already

been touted for players who participate in the

league, with expulsion from this season’s

Champions League as well as future UEFA and

FIFA events just one of them.

Perez moved to dispel such rumours when he

night, claiming the players have nothing to

“The players should remain calm [after threats

from UEFA about being able to play in any

UEFA sanctioned competition] because the

threats won’t happen,” he said. “But those who

run the monopolies at UEFA have to be

“They are not going to kick us, Manchester City

or Chelsea out of the Champions League, we’re

Despite Perez’s attempt to settle the nerves of

the clubs and players involved, reports have

close to ‘losing their nerve’ over the agreement.