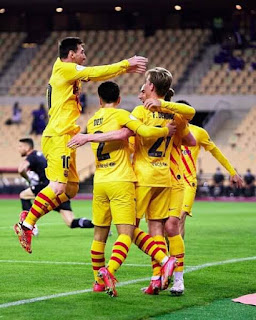 How will Barcelona line up against Getafe?

Barcelona return to La Liga action on Thursday against Getafe and should be in good spirits after Saturday’s Copa del Rey win over Athletic Bilbao.

Ronald Koeman’s men have just eight La Liga games left to play in 2020-21 and know that if they win them all they will be crowned champions.

Of course that’s easier said than done and Getafe will be buoyed after holding Real Madrid to a goalless draw at the weekend at the Coliseum Alfonso Perez.

Koeman has plenty of options in defense as the team’s injury problems have eased. Center-back Gerard Pique made a successful return from knee trouble in the final of the Copa del Rey, while Ronald Araujo will also be keen to get the nod from the off.

Sergi Roberto is also an option to come into the team in place of Sergino Dest. The 29-year-old also made his return from injury the final of the Copa del Rey, coming off the bench to replace the American in the second half.

Koeman made his feelings pretty clear about his midfield options last time out, leaving Riqui Puig and Miralem Pjanic in the stands for the final and selecting two goalkeepers on the bench.

Ilaix Moriba was a substitute again and enjoyed another cameo. The youngster has clearly leapt above Puig and Pjanic in the pecking order at the Camp Nou after impressing when handed first-team opportunities under Koeman.

Sergio Busquets, Pedri, and Frenkie de Jong remain the favored trio and look set to start again on Thursday night with Ilaix or even Roberto the most likely player to come into the midfield if Koeman does decide to freshen things up.

Antoine Griezmann was back in the starting XI last time out and will be hoping to continue after scoring in the Copa del Rey final. There have been whispers Ousmane Dembele is struggling with a groin problem and he was only a late substitute against Athletic.

It’s not clear how much the injury is troubling Dembele but it could mean he’s back on the bench again on Thursday. Martin Braithwaite will miss out because of a sprained ankle, while Lionel Messi should lead the team out as usual at the Camp Nou.