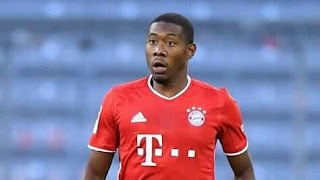 Real Madrid have reportedly reached an agreement with David Alaba, who was also a target for Barcelona, over a Bosman move this summer.

According to Sport News journalist Max Bielefeld, David Alaba is on the way of joining Real Madrid on a free transfer in the summer transfer window. The Bayern Munich star has reached an agreement over a five-year deal, and has snubbed Barcelona in favour of their bitter rivals.

Alaba has enjoy a glorious decade-longer spell with Bayern Munich, winning every  trophy in year they have contested for in this period at least 2 time. Over the course of his stint with the German giants, the 28-year-old has amassed 427 appearances while chipping in with 33 goals and 53 assist

In particular, though, he has impressed the world with his versatility, having played as a left-back, a centre-back

and a central midfielder while at Bayern. Heading into the summer transfer window, though, Alaba is set to become a free agent after failing to reach an agreement over a new deal, with his current contract running out at the end of the season. This situation alerted Barcelona and Real Madrid.