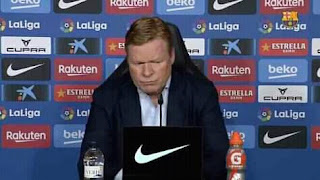 Koeman: there is 3 Club We’re Better Than Barcalona In Laliga

Ronald Koeman: ‘I don’t think we’re stronger than the other three teams’

“They’re winning games too and we all have tough matches left. The fight will be until the final day,” Koeman said to the press following Barca’s win against Getafe.

Angel Correa has stepped up for Atleti in the absence of Luis Suarez. The Argentine has scored 3 goals in his last 2 league games to help Los Rojiblancos to back-to-back wins.